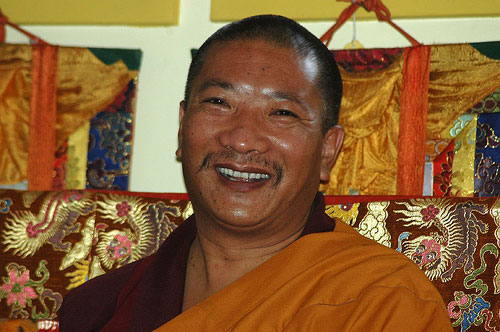 Venerable Drupon Thinley Ningpo was born in the Nagchu District of Tibet. He engaged in the study of a wide range of Drikung Buddhist traditions, including ritual practices, mandala and stupa design and construction and the art of producing bronze images of sacred beings. Subsequently, he was made director of the project to construct a new main stupa for the Brongngur monastery. After completing this project, he went on a pilgrimage to Drikung Thil Monastery where he met the great yogin and scholar, Drubwang Pachung Rinpoche. Drupon Thinley Ningpo was inspired to ask for the essential precepts for the higher spiritual practices. He was able to receive the profound essence instructions in the practice and mastery of the peerless Mahamudra from Drubwang Pachung Rinpoche.

In 1988, Drupon Thinley Ningpo went on a pilgrimage to the sacred places of Tibet. This brought him to the western regions where he took a fortuitous opportunity to escape to India. This was accomplished through a very perilous two-month journey on foot across the Himalayas. Once safely in India, he proceeded to the Drikung Kagyu Temple and entered into the institute of higher education. After completing his course of study, he was appointed as dean of the institute. He served in this capacity for six years.

Drupon Thinley Ningpo spent 1994 in spiritual retreat, during which time he accomplished all the preliminary practices of the Five-fold Mahamudra. He then went to the Dorje Redrubde hermitage in Alora where he entered into the traditional three-year retreat, where he accomplished the practices of the Five-fold Mahamudra and the profound path of the Six Yogas of Naropa. He participated in the Drikung Kagyu Snake Year teaching retreat where he received the entire body of Drikung Kagyu empowerments, transmissions, and instructions for advanced practice. In this way he completed the process of advanced training in all the profound and sacred traditions of the Drikung and earned the title of Drupon “master of spiritual attainment.”

Drupon Thinley Ningpo has recently relocated to Wesley Chapel, FL, just north of Tampa, and is establishing a Dharma center for study, practice and retreat there.