Mahamudra Investigation
Mani Practice of Our Vast Noble Heart Chenrezig
Manjushri Photo Visualization
Marmé Mönlam
Milarepa Songs 9,10,11
Milarepa Songs 6,7,8
Milarepa Songs: Challenge from a Wise Demoness
Milarepa: The Song of the Snow Ranges
Milarepa Songs: The Tale of Red Rock Jewel Valley
Milarepa Songs: The Journey to Lashi
Nagarjuna’s Letter to a Friend – Root Text
Namo Guru Song
Namo Guru with Images
Narak Kong Shak Text
Ngondro Sadhana -Practice of the Preliminaries of FiveFold Mahamudra
Opening and Closing Prayers
Parnashavari-Sadhana
Prayer To Be Reborn in Dewachen (Metered Tibetan & English)
Prayers for Special Days, Chotrul Duchen, Saka Dawa v 4
Recollection of Clarity
Resources for Study of the Bodhicharyavatara
A Sādhana of the Glorious Vajrasattva, a Method of Purification and Accomplishment for Both Self and Others
The Sādhana for the Single Mudrā Vajrasattva
Self Liberation through Seeing with Naked Awareness
Seven Verses of Supplication to the Protection of Tara (English)
Seven Verses of Supplication to the Protection of Tara (Chinese)
Seven Verses of Supplication to the Protection of Tara & Prayers to Achi & Ekajati
Short Commentary on Supplication to Tara
Short Drikung PHOWA Practice
Short Drikung PHOWA Practice (Trilingual)
Six Paramitas: A Commentary on verses 25-30 of The 37 Practices of Bodhisattvas
Sole Kilaya of the Sacred Bond of the Heart
The Song that Clarifies Recollection Jigten Sumgon
Song of Realization
Special Teaching of the Wise and Glorious King
Suplicación a Tara – Español
Thirty-Seven Practices of Bodhisattvas
Vajrakilaya Practice
Vajrasattva from the Essential Secret Bindu Cycle
Vajrasattva – The Wishfulfilling Jewel
White Sur Offering
White Tara Sadhana 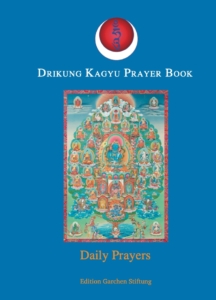 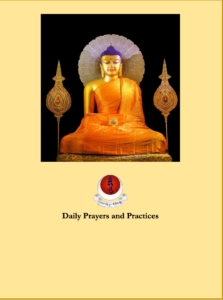 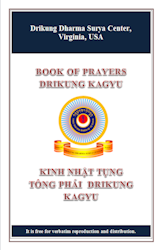 The English translation is reprinted with the kind permission from the Tibetan Meditation Center and Vajra Publications. Section V: Guidelines for Dharma Practitioners was subsequently added to the current printed version of DDSC.

The complete prayer book was formatted and the original Vietnamese translation was edited by Drikung Dharma Surya Center in 2015. 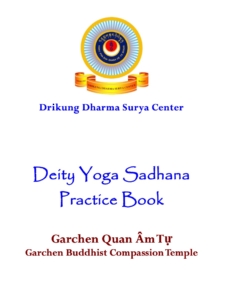 Helpful Texts for the Dying & Deceased 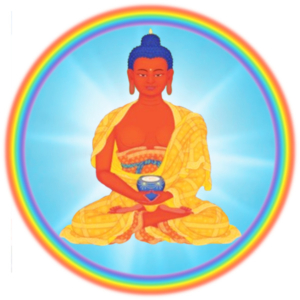 Please click below to make a secure donation via credit card.

Use PayPal for Your Donation

Please click below to make your donation via PayPal.

The texts listed below are made available by the Drikung Kagyu Official Web Site.
We ask that you:

In Praise of the Great Holy Praise Tsaritra, The Embodiment of Bodhicitta
Download PDF File Now

For the sādhana of Chakrasamvara and other sadhanas, please check direct links here 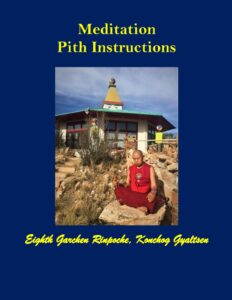 This book offers a rare view into the heart-to-heart transmission of oral instructions on meditation from His Eminence Garchen Rinpoche at Drikung Dharma Surya Center in August of 2015.  The current, 8th, Garchen Rinpoche is a Tibetan lama, a realized yogi, a skillful teacher, and the beloved Guru of many of us.  He is the incarnation of a 12th Century realized yogi named Gar Chodingpa, one of the heart disciples of the famed Jigten Sumgon, Kyobpa Rinpoche—founder of the Drikung Kagyu lineage, that can be traced back to the great translator Marpa Lotsawa, and the greatest yogi of Tibet, Milarepa.