Ven. Khenpo Tenzin Nyima was born in 1973. At the age of five, his grandmother and uncle taught him the basics of the Tibetan language. At fourteen, he met the Ven. Lamchen Gyalpo Rinpoche in whom he took refuge and who gave him the hair cutting ceremony marking his transition to a monk. At fifteen, upon his successful passing of all examinations, he went to Jangchubling where he undertook the nine-year curriculum of Buddhist Philosophy. He was awarded the title of Khenpo (equivalent to a Doctor of Philosophy) by H. H. Drigung Kyabgon Trinley Lhundrub Rinpoche upon his graduation on March 2, 1998.  In 1982 Ven. Khenpo Tenzin Nyima immigrated to the US and currently resides at Gampopa Vajrayana Buddhist Center where he assists Ven. Lamchen Gyalpo Rinpoche in his Dharma activities and from whom he receives Tantrayana transmissions, empowerments and instructions in the Drigung Kagyu Lineage. 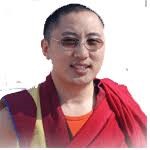