Khensur Rinpoche Lobsang Jamyang, an Abbot Emeritus of Sera Mey Monastic University, was born in 1933 near the Lithang locality of Kham region in Tibet. Unlike most ordinary kids, even at a very young age, he expressed strong desire to be a fully ordained monk when he became older. He joined Lithang Jamchen Choekhorling, a monastery in Lithang, and excelled in learning the rituals and chanting. He became a role model for the monks of the monastery.

Because of strong support based on prophesy given by high lamas and deities, as well as many other external and internal signs, Gyaltsap (Regent) Trulku (incarnated Lama) Rigzin Ngyendag and Lophel Trulku of Nyag-me recognized Khensur Rinpoche Lobsang Jamyang as the unmistaken incarnation of Chagdue Trulku of Nyagrong, a place in Kham. At sixteen (1949), he received his novice monk ordination from Khenchen (Great Abbot) Jaza Dorjee Chang and was given the Dharma name – Lobsang Jamyang.  Ạt twenty-four, he entered Sera Mey Monastic University in central Tibet. While at Sera Mey, at the feet of many great teachers, he studied several main scriptures. About a year later, 1959, both Tibetan government as well as the Tibetan people had to flee the country.

At the age of thirty, Khensur Rinpoche Lobsang Jamyang deliberately traveled to Bodhgaya, the place of Shakyamuni Buddha’s enlightenment, to receive full ordination with complete vows from His Holiness the 14th Dalai Lama. From that time on, Khensur Rinpoche remained in Sera Mey working hard for his Geshe degree (equivalent to a Ph.D. in Buddhist philosophy).  In 1996, he received from His Holiness the Dalai Lama the letter of appointment as the Abbot of Sera Mey Monastic University.  Soon after he was enthroned as the Abbot of Sera Mey Monastic University and received the title Khen Rinpoche (precious Abbot). His first act as Abbot was to launch the project of the construction of a new Prayer Hall, as per His Holiness’ suggestion (learn more about the new Prayer Hall Construction project). 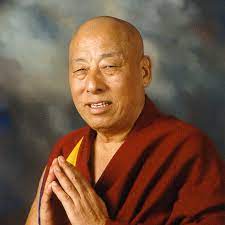