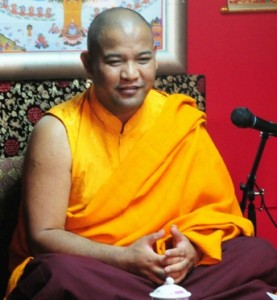 Khenpo Tsultrim Tenzin took his monk’s vows at the age of 14. He studied the Thirteen Major Texts with Khenchen Nawang Gyalpo Rinpoché and other khenpos. He also received the entire Lamdré-cycle of empowerments of the Ngor-Sakya lineage from Khensur Khenchen Rinpoché and from Amdo Lama Togden Rinpoché and Dilgo Khyentse Rinpoché he received many Nyingma empowerments and teachings. Later, Khenpo Tsultrim joined Drikung Kagyu Institute at Jangchub Ling in Dehra Dun and there met His Holiness Drikung Kyabgön Chetsang. The spontaneous devotion he felt for His Holiness resulted in his request to His Holiness to join the monastery there and continue his education.

Having already completed the first four years of his studies at other monasteries, Khenpo Tsultrim quickly completed his education at Jangchub Ling. After three years teaching lower classes in the monastic college, he was enthroned by His Holiness Drikung Kyabgön Chetsang as as a “Khenpo” in 1998 and spent three more years teaching Buddhist philosophy at the Institute. In between his busy schedule first as student and later as instructor,  Khenpo Tsultrim completed the Ngondro, Cakrasamvara and other practices while in retreat.

In April 2001, Khenpo Tsultrim arrived at the TMC to assist Khenchen Rinpoché and also to improve his mastery of the English language so that he can be of more benefit to the spread of Dharma. He began teaching at TMC in August of that year and was subsequently appointed as co spiritual director of TMC by Khenchen Rinpoché. Khenpo Tsultrim is known and loved for his engaging teaching style as well as his complete lack of pretensions.