Jhado Rinpoche (Tenzin Jungne) was born in 1954 to a nomadic family living in the area of Namtso Lake, 220 kilometers north of Lhasa, Tibet. At the age of three he was recognized and enthroned as the 6th incarnation of the abbot of Jhado Monastery. From 1992 until 1996, Rinpoche served as a teacher at Namgyal Monastery in Dharamsala, the personal monastery of His Holiness the Dalai Lama.

In 1997, Rinpoche was appointed to the post of Abbot of Namgyal Monastery, and served the institution in that capacity until 2004.  Jhado Tulku Rinpoche is one of the most highly esteemed lamas in the Geluk lineage today.

In addition to his excellent education in the Geluk monastic college system, over the years Rinpoche has also received many oral transmissions and empowerments from His Holiness the Dalai Lama and his two main tutors, as well as from many great teachers from other traditions, including the famous Nyingma master Trulshik Rinpoche and Chogye Trichen Rinpoche. 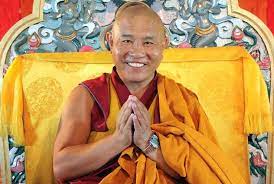