Lobsang Tubten Jigme Gyatso, officially the 8th Arjia Hotogtu, born 1950 in Haiyan County, Qinghai, is one of the most prominent Buddhist teachers and lamas to have left Tibet. At age two, Arjia Rinpoche was recognized by Choekyi Gyaltsen, 10th Panchen Lama as the 20th Arjia Danpei Gyaltsen, the reincarnation of Je Tsongkhapa’s father, Lumbum Ghe, the throne holder and abbot of Kumbum Monastery. He has trained with lineage teachers, such as the 14th Dalai Lama, the 10th Panchen Lama, and Gyayak Rinpoche—from whom he received many sacred teachings and ritual instructions.

During the Cultural Revolution in Chinese controlled Tibet, Arjia Rinpoche was forced to leave his monastery and attend a Chinese school, yet secretly continued to practice and study with his tutors. In addition, he was required to work in a forced Labor Camp for 16 years. Following the Cultural Revolution, Rinpoche continued serving as Abbot of Kumbum—overseeing the renovations in the monastery and reestablishing monastic studies. In 1998, due to the strained political climate in Tibet, Arjia Rinpoche went into exile because he would not compromise his spiritual beliefs and practices. He escaped to the United States where he now lives and started a Buddhist Center for Compassion and Wisdom (TCCW) in Mill Valley, California, a center committed to the preservation of Buddhist teachings, art and culture within and outside of Tibet and Mongolia. In 2005, he was appointed Director of the Tibetan Cultural Center (TCC) in Bloomington, Indiana by the 14th Dalai Lama. TCC was recently renamed the Tibetan Mongolian Buddhist Cultural Center. Presently, he directs both TCCW and TMBCC.

Throughout his life, Arjia Rinpoche was tutored by specialized teachers in the area of Buddhist philosophy, sutra and tantra teachings, as well as in Buddhist art and architectural design. He was in charge of the renovations of Kumbum monastery in 1991 and launched several projects including the following: Red Cross Organization in Kumbum, Disaster Relief Project for local villages, a clinic for villagers run by monks of the Tibetan Medical Institute and a school for local village children. 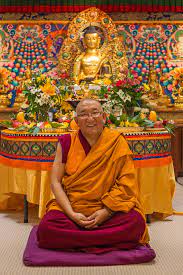