Geshe Ngawang Sonam received his novice monk’s vows in 1996 from the late Kyabje Dhakpa Rinpoche and his full ordination as a Bikshu from His Holiness the 14th Dalai Lama in 1997. In 2008, after placing first in his examinations in his last year of Madhyamika Philosophy, he was selected to become one of the English translators for His Holiness the Dalai Lama. Since 2008, he has travelled extensively with His Holiness to nine countries around the world. In 2009, Sera Mey Monastery conferred upon him the Rigchung Degree.

In 2011, he travelled to several Tibetan camps in South India and gave extensive talks on Buddhism. He joined the Office of His Holiness the Dalai Lama in 2016 and simultaneously completed his two final years of Gelugpa University Examinations. He became a Geshe Lharampa, [equivalent of Doctor of Divinity] in January 2019. Geshe Ngawang Sonam has been a speaker at conferences with scientists on many occasions, including two panels on Quantum Physics and Buddhism last fall. He has taught in India at various Buddhist communities and given lectures at Tibetan schools and college hostels. 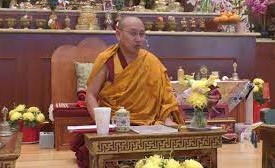