Several of the early Drikung Denrab attained prominence, among them Chenga Drakpa Jungne (1175–1255), a heart son of Jigten Sumgön, who was entrusted with the leadership of Phagmodrupa’s monastery, Densa Thil. He led the monastery to a new period of flowering and took over the throne of the Drikung in 1235. He guided the order through difficult times with a calm and steady hand. When the Tibetans revolted against Mongolian overlordship and stopped paying tribute, Ogodei (1186–1241), the son and successor of Genghis Khan (1162–1227), ordered a horrific punitive action in 1239. Mongolian troops burned down many monasteries, among them Reting (rwa sgreng), where they slaughtered 500 monks and moved on towards nearby Drikung. The secular ruler of Drikung opposed them, was taken prisoner and was to be killed. It it said that stones rained down from the skies when Drakpa Jungne hastened to the Mongolian forces from Drikung Thil. Perhaps it was just a strong hail-storm. In any event, his courageous intervention resulted in a peace settlement with the Mongolians. The brutal attack on Reting Monastery was evidently meant as a warning to Drikung. But Drikung was spared a confrontation with an uncertain outcome, and rose to become a major power in central Tibet.

Kunga Gyaltsen, later known as Sakya Pandita (1182–1251), concluded a pact with Godan Khan, Ogodei’s general, in which Tibet accepted Mongolian suzerainty and agreed to pay tribute. The settlement that Kunga Gyaltsen had reached with Tibet’s powerful neighbor did not meet with unanimous support in his homeland. Many Tibetan noblemen resisted the demands for tribute. Mongolian troops put down their rebellion with a bloody and crushing defeat in 1251.

Kunga Gyaltsen’s nephew and successor, Phagpa Lodrö (1235–1280), became the spiritual teacher of Khubilai Sechen, Great Khan of the Mongols since 1259, and later of Great Khan Khubilai (1215–1294). Their close contacts with the Mongols enabled the Sakya sect to assume political leadership within Tibet, as the ambitions of the Karma Kagyu to win support of the Mongols were unsuccessful. In 1275, Khubilai Khan gave Phagpa Lodrö the provinces of U and Tsang, as well as Kham and Amdo as feudal fiefdoms. The provinces were divided up into so-called myriarchies, administrative areas theoretically encompassing 10,000 families. When Khubilai became Emperor of China in 1279 and founded the Yuan Dynasty, he conferred on Phagpa Lodrö the title of “Imperial Preceptor.” In this way, for the first time in Tibet, the hierocratic form of government was constituted in a relationship of patronage between the Emperor and his spiritual teacher.

Resistance to this transformation of the country into feudal fiefdoms began to stir among the Tibetan aristocracy, especially in the provinces of Ü (dbus) and Tsang (gtsang) in central Tibet, closely connected with the Drikung, Phagdru and Karma Kagyu. At the same time, the Mongolian tribes were engaged in struggles over leadership and landed estates among themselves. Drikung had risen to great power by this time. Reports exist that even as early as the rule of the 5th Denrab, Chung Dorje Drakpa (1210–1278), great numbers of monks were streaming to the Drikung monasteries. After the death of the Great Khan Mongke in 1259, Hulagu (ca. 1217–1265), Khubilai’s brother and rival, became the protector of the Drikung Kagyu order and he sent a small Mongolian unit to Drikung for their safety and security.

But soon rival Mongol groups were battling out a dispute among themselves on Tibetan soil that would later go down in history as the war between Drikung and Sakya. This was not a “war of religion,” or a feud between two schools of Tibetan Buddhism, as is often claimed, but rather an attempt on the part of a few provinces of central Tibet to revolt against the overlordship forced on them by Khubilai with support from rival Mongolian groupings. The actual local conflict centered on disputes concerning the succession in Phagmodrupa’s monastery of Densa Thil. Here, branches of familial lines of the Lang clan were pursuing interests that were at variance with each other. One branch was supported by the Sakyapa and the other by the Drikungpa. The war broke out under the 7th throne holder, Tsamche Drakpa Sonam (1238–1286). In 1290, under his successor Nub Chogo Dorje Yeshe (1223–1293), Drikung Thil Monastery was devastated by Mongolian troops. This disaster did not come unexpectedly for the local population. As Dorje Yeshe was not a member of the Kyura clan, but of the Nub clan, he lacked support in difficult times, because of the prevalent view that it was not in accordance with the wishes of the lineage founder for a clan-outsider to occupy the throne of Drikung.

Drikung Thil was rebuilt under the 9th throne holder, Chunyi Dorje Rinchen (1278–1314), with support from the Emperor and the Sakyapa. But the powerful influence that the monastery had exercised for decades in Tibet was gone. Dorje Rinchen laid down a new rule of three yearly periods for monastic instruction. While primarily philosophical texts of the lineage and the fundamentals of Mahayana Buddhism were taught in spring and autumn, in summer teachings on the Fivefold Path of Mahamudra were given. In winter, wearing only light cotton garments, Dorje Rinchen taught the Six Yogas of Naropa on the great terrace outside the main temple of Drikung Thil.

In the 14th century, the Phagmodrupa assumed secular leadership in central Tibet. Members of the school of Tibetan Buddhism of the same name that was in a state of decline are not being referred to here, but rather the rulers of the Lang clan that was closely associated with the Phagdru order. The central figure of this epoch was Jangchub Gyaltsen (1302–1373), both a skillful politician as well as a monk of the Phagdru Kagyu. He led the country to greater independence and created a new system of administration. His reforms worsened relations with Drikung, leading to armed conflicts with the Phagmodrupa. After initial successes, the Drikungpa were forced to accept a few painful defeats on the battlefield and come to terms with the rule of the Phagmodrupa in northern Ü. Towards the end of Jangchub Gyaltsen’s life, the Drikungpa succeeded in reestablishing the autonomy of their lands. At about this time, a shift in the balance of power was taking place in Asia through the fall of the Yuan Dynasty and the ascent of the Ming Dynasty (1368–1644) as China’s imperial house. But the Mongols still remained a force that both Tibet and the Ming Emperors had to reckon with.

In the midst of all this turmoil, Chenga Chökyi Gyalpo (1335–1407), the 11th throne holder, attempted to raise the spiritual level of the Drikung order once again. He had the Kangyur of Narthang and the newly edited version of the Tengyur copied. Tsongkhapa (tsong kha pa, 1357-1419), the founder of the Gelug sect, traveled from Amdo to Drikung in 1373, and became a disciple of Chökyi Gyalpo. His family settled in a village about 40 kilometers away from the monastery. Tsongkhapa received the Drikung teachings on the Six Yogas of Naropa as well as all of the outer and inner texts by Jigten Sumgön. 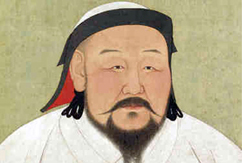 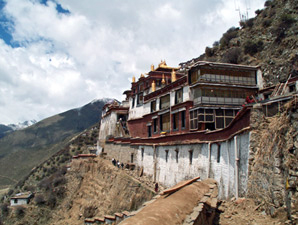