Generally, the focus of teachings on Mahamudra and other dharmas is on the disposition of mind; that is, what to do with mind, how to focus mind, how to analyze phenomena, and so forth. Very little discussion is centered on the disposition of the body; however, this is very important. You will find in descriptions of practices like the Six Yogas of Naropa that there is significant discussion of this, although it doesn’t take as much space as the discussion of mind. So, it is very important to know what to do with the body while engaging in various types of meditation.

First, there is the teaching on the sevenfold posture of Buddha Vairochana. The first of the seven aspects is the placement of the legs. In this posture, the legs are crossed in the lotus position, also called the vajra position. This position has many benefits. The benefit discussed in this context is that of redirecting one of the five winds. There are five main winds in the body. One is called the downward-clearing wind. Normally this wind is involved in all of the processes of evacuating things from the body, like the bowels, the urine, and so forth. It is responsible for anything that is pushed downward and out the lower orifices.

Regarding its function for the mind, it is engaged in the activity of the kleshas (poisons): greed, hatred, ignorance, jealousy, and pride. Of these five, the downward-clearing wind is most connected with the klesha of jealousy. Placing the legs in the vajra position inhibits, or blocks, the function of jealousy and in general redirects the force of the downward-clearing wind to the central channel, thereby clarifying mind and inhibiting the klesha of jealousy.

Next, the hands are folded together, palm upward, right on top of the left. The thumbs are held over the palms. The position of the right palm should be four finger-widths below the navel. This hand position redirects the force of the wind which is associated with the water element. By inhibiting its movement, by redirecting it to the central channel, the klesha of anger is inhibited.

Next, the spine is set very straight, not leaning one way or the other, forward or back, but completely straight up and down. You should visualize it as a stack of coins one on top of the other, all the way up the length of the spine such that it would fall over if it leaned one way or the other. The shoulders should be held back a bit, opening up the chest. This is said to be like a soaring bird with its wings stretched back, but don’t hold them too far back, just a little. Another way to think of this posture is that you are holding your chest outward and shoulders slightly back. This causes the wind associated with the earth element to enter the central channel, thereby inhibiting the klesha of delusion.

The chin is held slightly downward and the tongue is held up towards the palate near the base of the upper front teeth. The teeth are held slightly open so air can pass between the upper and lower teeth, so don’t clench the jaw. All of this influences the wind associated with the fire element, causing it to enter the central channel and inhibit the klesha of desire.

The eyes should be generally directed at a spot four finger- widths in front of the tip of the nose and slightly downward. Gently, softly focus at that spot about an arm’s length in front of your nose. The eyes should not be wide open, just gently look in that direction. This influences the wind associated with the space element, causing it to enter the central channel and inhibit the klesha of pride.

This position of the body is very important because the channels within the body will follow the external disposition of the body. The way the body is placed will set the channels; and the winds, of course, flow inside the channels, so if they are properly set, the winds will flow properly. Mind follows the wind. To focus the mind properly, the winds must also be functioning properly. The closest association between the mind and the winds comes through the eyes. The focus, or disposition, of the eyes is influenced by the winds, which in turn influence mind, so it is very important how the eyes are focused. For the beginner, itÕs easiest for the gaze to be directed somewhat downward and in front of you. A more advanced practice takes place with the eyes focused more straight ahead, and some highly advanced practices involve looking somewhat upward. There is also an association between the various practices and various goals or attainments. The manifestation body, nirmanakaya, is associated with the gaze directed downward, sambhogakaya straight ahead, and dharmakaya with the gaze directed slightly upward. The direction and focus of the eyes is important depending on one’s disposition and the relative predominance of the elements.

The four elements are of different strengths in different individuals. Some individuals are said to have a relatively greater amount of the earth element, for instance. Such a person will tend to relax and easily fall asleep, get drowsy very easily. For that type of person, it’s good to focus the eyes somewhat upward which will help keep them from falling into lethargy and sleep. Others, whose minds are constantly disturbed by random thoughts or excited thoughts, should look downward to help gain control over that process.

Following the gradual, or the ordered, course of the teachings, after the disposition of the body come the discussions of shamatha and vipashyana. 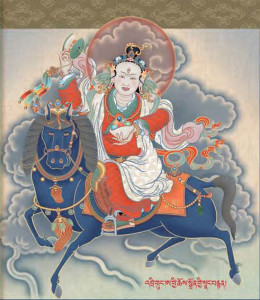