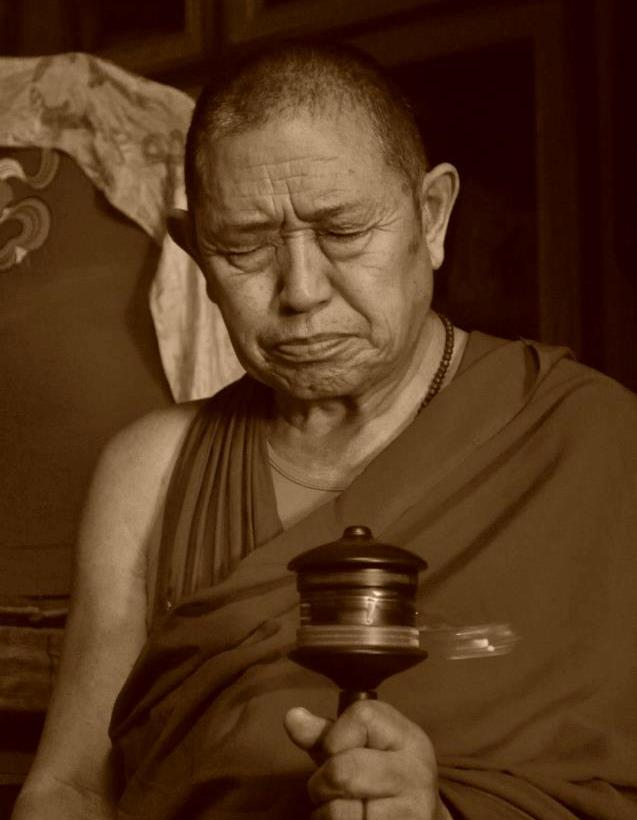 So we cultivate such a mind of love when we, for example, think about the kindness that others have given us. So, we give rise to altruistic mind because we understand first of all it benefits ourselves. When we understand the benefit of that, that is the time we begin the practice of “Tonlen” of giving and taking.

Then, what we really need to cultivate is the mind of the deity, and that is Boddhicitta, a wish to benefit others. At that moment, when that mind is present, the deity becomes the actual wisdom being. If that thought is absent, only the form is the deity, not the mind. Then, it is only a worldly god. That is something to be careful about. It is necessary that, when you practice a yidam deity, you always do so on the basis of a wish to benefit sentient beings.

Then, we think about the suffering of sentient beings and what is the cause of their suffering. The cause of suffering of all beings arises from the afflictions. For example, in this world, there are countries where there is much war. The cause of that are actions committed with the mind of hatred and jealousy.

In brief, even the slighted suffering has its cause in self-grasping only. So, understanding that, then, you should think, is the self-grasping, the self of all the sentient beings in the three realms of samsara and my own self-grasping the same or not? When you really look at it, you will see it is exactly the same.

Then, define the self, where actually is that self? When you look at that, it is actually nowhere. It is only something we have fabricated. We are holding on to a self where actually there is no self.

Then, however, why isn’t it possible that we just let go of it? That is because we have habituated t to this idea since beginningless time in samsara. Therefore, the mind has become like ice-blocks floating on the ocean. The Buddha mind is like the vast ocean. The countless Buddhas, the ocean is vast, but there is no duality, no division in the vast ocean.

And the various enlightened activities of these Buddhas are like the waves on the ocean. On the other hand, the mind of sentient beings in Samsara is like blocks of ice. That is due to self-grasping. Due to self-grasping, we give rise to afflicted emotions. These emotions lead us to accumulate karma. These actions of karma place habitual imprint in the mind. These imprints then create Samsara.

So, that is really important to understand. The root of all Samsara is self-grasping. So, for another visualization, when you inhale air, you can think that I am inhaling all the self-grasping and obscurations of sentient beings.

So you inhale with Om, and you think in this way, bringing in all the grasping of beings. Then with Ah, it dissolves into the fire at the navel. Then, with Hung, you exhale, think that your own Boddhicitta or the self-grasping which has become altruism then is exhaled and pervades all beings.

So, first of all, we need to identify self-grasping. This is self-grasping. Then, we draw it in, and the we visualize now it has been burned away. Then it becomes an altruistic mind after having been burned away. Then, that altruistic mind has been exhaled with the syllable Hung. And think that that then pervades all sentient beings.
So, this is how you could visualize. Or, you can also visualize that when you inhale the air, that the self-grasping and the afflictions appear in the form of a dark or black smoke. Then, when you exhale, the pure air, having purified that, you can think that it is purified in the form of seed syllables or like rainbow forms of Chenrezig or Tara and so forth, whichever deity, then pervades all beings and brings them whatever they need. For example, if they need wealth, it brings them wealth. Or if they need children, it brings them children. Or if they need food, it brings them food and so on. And it creates Boddhicitta in the mind of those who have not given rise to Boddhicitta.

So, in this way, you can think it pervades all beings. Whether or not you have the capacity to pervade all beings, you can only see when you look at your own mind. So when you look at your own mind, you see first of all the vast suffering of all the sentient beings of three realms, you understand sentient beings are limitless, likewise, their karmic visions and imprints are limitless.

Then, next second, you understand the root of all that suffering is self-grasping. Understanding the third, you want to help them, you want to benefit them. If you have that wish to benefit them, then you have the capacity to pervade them. The greater love and compassion you have, the greater capacity you have to pervade all sentient beings. So, you pervade sentient beings with compassion and that purifies their obscurations. At the same time, you can also think that, this mind also pervades all the pure and there it makes offerings to all the Buddhas.

So, in this ability to benefit, you should have very firm confidence. This is how we can practice Om Ah Hung in the context of “Tonlen”.