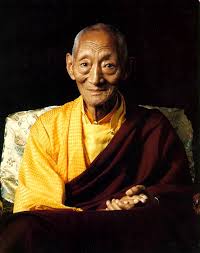 Those who take the major ordination must respect 253 rules related to the life of a bhiksu. Those who take the bodhisattva vows must practice the related precepts. As for the Vajrayana commitments, they are associated with and are given with empowerments.
Hinayana vows are, in a way, the basis on which the practice of the Buddha’s teachings develops. For this reason, they have a great importance and are sometimes seen as indispensable for approaching other levels.
The bodhisattva vows are transmitted through two lineages: the lineage of vast activity and the lineage of deep wisdom.
In the framework of the first lineage, the bodhisattva vows cannot be received unless monk or brahmacharya vows have been previously taken. In the context of the Vajrayana, the importance of the Hinayana vows is also emphasized. In the Kalachakra tantra, for example, it is declared that to receive Kalachakra empowerment, the best condition is to be a bhiksu, or at least a shramanera, this state being itself superior than the state of those who have no vow.
Sacred Vajrayana commitments The Vajrayana, as Hinayana and Mahayana, implies vows, or sacred commitments (Sanskrit, samaya; Tibetan, damtsik) related to the empowerments.

An empowerment carries in itself a great force, a powerful blessing, and an important manifestation of compassion. The benefit of the empowerment obtained by the disciple largely depends, however, on the observance of sacred commitments accompanying it. It is said that if commitments are respected, the disciple will obtain liberation, if they are transgressed, the disciple will fall into inferior realms.
To understand how crucial these commitments are in the Vajrayana, it is said that a follower of this path is like a snake trapped in a bamboo stalk. There are only two possibilities, to ascend or descend; exiting on the side is impossible. In the same way, the Vajrayana practitioner, whether respecting or transgressing the samayas from the empowerments he or she has received, can only ascend or descend without choice of a third path.

From a certain point of view, the commitments of the Vajrayana may appear impossible to observe, because there are so many. The major monastic ordination already has a relatively important number of rules, 253 rules for the monks (bhiksu) and 440 for the nun (bhiksum). Some tantric texts claim that there are no less than 10,100,000 samayas related to the Vajrayana practice! However, when one understands the function of the Vajrayana and even more when one is truly committed to its practice, things appear easier. Indeed, it is said that the identification of our three doors to the three vajras of the deity is enough for the observance of the 10,100,000 samayas. This means that all commitments are maintained to the extent that one’s body is assimilated to the deity’s body, one’s speech to the mantra, and one’s mind to the meditative absorption (Sanskrit, samadhi).

The Subduer said that all the unbearable suffering of bad rebirths is the fruit...A talk on devotion by Dzongsar Khyentse Rinpoche
Scroll to top
Donate to Drikung Dharma Surya Center